NETWORKING: Get started doing it now! 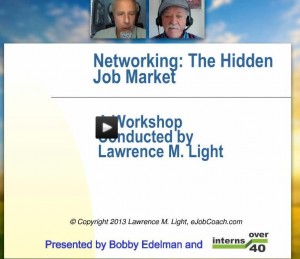 What does this mean? It means you have a better chance of finding, and getting, a job if you learn how to network correctly because employers, obviously, want to hire someone who’s been referred by an existing employee.

I have a friend, also a coach, who preaches that you don’t need a resume, you need a lot of friends. “If I were an employer, I’d ask my employees to find someone they know, preferably friends, to fill an open position. Heck, I might even give them a bonus for finding someone they know.”

While I disagree that you don’t need a resume, I certainly endorse the process of knowing enough people so that, when a job comes up, they think of you. You immediately become an insider. You also, I believe, need to have a good powerhouse of a resume with you, so that you have something in writing that the potential employer can retain, after they call you for an interview.

But the stumbling block, for most people, is that (a) they don’t know to build a network and (b) because of that, they’re afraid to do so, as well as (c) they don’t know how to maintain that network throughout their career. Some people do this naturally, but most people, unfortunately, don’t.

The real reason most people don’t build and maintain a network is because they have a mistaken idea about what networking actually is. They have a fear of cold-calling and believe you have to “sell” others to build such a network. “Cold-calling” equates in their mind with being pushy, exposing yourself to lots of rejection, and behaving like the worst kind of sales person.

Believe it or not, there is an alternative to such “cold calling” … there is an alternative to being pushy. It even works for shy people. It used to be called information interviewing, but that’s an old-fashioned and much too formal way to do it. That’s been updated and it’s known to work for anybody who puts a little effort into it. You can even start with people you know and feel comfortable with.

So, if you want to increase your chances of finding, and getting, a job, and keeping it, get out there and start networking!

Interested in more information about this subject, especially for shy people, based on what works for the clients of a job coach with more than fifteen years’ experience? Learn More Here.