Home » Job Seeker » Have you ever lied on your resume?

Have you ever lied on your resume?

You’re writing your resume and decide to say,

“I was responsible for growing the business from 100k to 2 million dollars in 1 year.”

Impressive. But, you didn’t mention that your company bought another company with 1 million in sales or that you worked within a team of 10. Is this an embellishment or a lie? 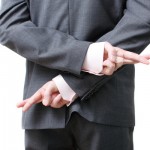 If you’ve had questions about your resume, be sure to apply for this week’s  Free Resume Review  by Career Coach Larry Light.  (First 50 Interns Over 40 Insiders to apply here)

“When Do Exaggerations and Misstatements Cross the Line?”

When public figures are caught embellishing their accomplishments or qualifications, whether by exaggeration or misstatement, people everywhere express outrage. Indeed, as more and more politicians, CEOs and other big names these days try to make amends for fudging their resumes, incorrectly relating the details of a story or otherwise playing fast and loose with the facts, the general reaction from an increasingly jaded public is: “What were they thinking?”

As it turns out, what they were thinking isn’t much different from everyone else.

Embellishment is part of human nature, experts say, and almost everyone is guilty of it at one time or another.

Left unchecked, however, exaggerations that seemed innocuous at first could result in serious, potentially career-ending consequences. “[Getting caught] can be devastating; I think it can ruin a person,” says Alan Strudler, a professor of legal studies and business ethics at Wharton. That’s unfortunate, he adds, “because embellishment is just a human frailty. But once you’re caught in a deception, even if it’s a common deception, people won’t trust you. And once the bond of trust is lost, it’s terribly hard to recover.”

In today’s work environment, where no one comes in for a job interview without being Googled first — and where small talk in the elevator or comments made at a staff meeting are just a Twitter post away from reaching a global audience — it’s easier than ever to get caught in an exaggeration, Wharton experts and others note.

But the temptation to embellish has also never been greater, they say, as recession-weary workers feel pressured to justify their worth and a 24-hour news cycle demands that leaders have an immediate, sound-bite-ready answer for everything.

“The questions come when something happens that breaks the social facade that we’re all honest and we’re all trustworthy,” says G. Richard Shell, a legal studies and business ethics professor at Wharton. “When someone is revealed to have done something selfish, there’s a crack in the facade and then everyone has to figure out what that means. Does the crack reveal some sort of venal person, or does it reveal the same sort of hapless person we all are underneath?”

Finding the Line
The type of self-deception that most people employ falls in the middle of a spectrum occupied at one end by those who are complete truth-tellers, and as a consequence are often considered “rude and socially inept — think of a small child telling a dinner guest that she’s fat,” says Shell — and at the other end of the spectrum by pathological liars, who occupy a fantasy world that they believe to be real.
“Self deception is something that everyone is prone to,” Shell notes. “There’s a lot of research that says if we lack any positive illusions then that is a sign of depression…. We like to think of ourselves as being more important, more skilled and more experienced than we are. When a test comes, and someone asks what your experience is, or what your basis for stating something is, then it’s tempting to make something up.” Indeed, a 2003 report by the Society of Human Resources Management found that 53% of all job applications contain some kind of inaccurate information.

Although only 8% of respondents to a 2008 CareerBuilder survey admitted to lying on their resumes, nearly half of the hiring managers queried said they had caught a prospective hire fabricating some aspect of his or her qualifications. Almost 60% of employers said they automatically dismissed applicants caught making misstatements about their backgrounds.

The challenge, experts say, is not to cross the line from harmless puffery to a more damaging form of elaboration. In some cases, the limits of what is accepted and what isn’t are clear-cut — few would condone amplifications that break the law, for example, or cause others serious harm. Equally prone to reproach are cases in which company executives or leaders within an organization are found to have included degrees they never earned, or positions they never held, on their resumes, according to Wharton operations and information management professor Maurice Schweitzer.”